I have left Second Front!

Here is a pic of myself hanging out in a property that is acting as an unofficial tribute to the popular multiplayer video-game, (the) World of Warcraft in Second Life.

The news and rumours surrounding my recent disappearance are now official. I have decided to leave Second Front in order to focus on solo performances, smaller-scale collaborations, my RL family and academic research.

These past 2 years have been a very wild ride. It seems like yesterday when I first proposed starting a performance art group based on the Western Front Society in Vancouver.

I remember the exact day quite well.... November 21, 2006 happened to be my RL Wife's birthday and I had edited my avatar's appearance to my trademark style probably 6 hours before we celebrated her birthday over dinner. Naturally, she was the first one I asked to join Second Front. Basically, a few days after that, I asked everyone that I thought would be a good fit for the group via email solicitations and the core ensemble of 4 members had already been assembled. By about 2 weeks, we had grown to 6 and shortly after we had recruited even more high-profile Second Fronters such as Gazira Babeli. In fact, we had our first performance documented within a week of forming.

So now, change is in the air. In September, I am returning to Graduate Studies at Simon Fraser University's School of Interactive Arts and Technology. I am working towards a Masters of Interactive Arts there. This should give me the necessary excuse to further explore virtual worlds under the guise of "homework"... tee hee! ;-)

Also, I have been spending every Sunday with the Ars Virtua Guild (yes, the same group as the Contemporary Art Museum in SL) in the World of Warcraft as we have been developing my performance art series there.

So, lets just say that I have been extremely busy with all my other projects and upcoming research. You might not hear too much about Wirxli in the near future since some of my other projects involve my ALTs. I will still leave the door open though to collaborating with individuals from Second Front - I still love and respect them all and I am sure they will produce sublime (and realtime) work.

As for the Avatar Orchestra Metaverse, I am still unsure how often I can still commit to rehearsals since most of my free time has been on weekends and most of their rehearsals are on Tuesday afternoons. I will keep you posted with what happens there. Speaking of which, I promise to blog about my most recent AOM composition. I am still waiting for more archives to arrive before I am ready to blog that particular posting.

Ok, stay tuned for more sporadic Wirxli postings in the near future :-)
Posted by Jeremy O. Turner at 12:00 AM 9 comments: 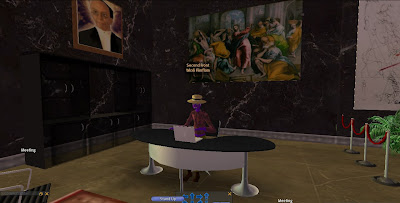 These past few weeks have been very intense and I have hardly any time to reflect on recent events. There has been a lot of change in my life lately and it might still be awhile before I come to terms with everything and post it gradually onto my blog here.

For now, I thought I would reflect on my brief and controversial life as the pioneer of the Virtual Community, Howard Rheingold.

For my final performance with Second Front, I decided to hijack Howard's avatar identity as he was one of the panelists being presented in San Francisco. Of course, I had to become "Howard" for a couple of days so I could get comfortable in my new role as Howard's evil doppelganger. To read about this performance and panel session, please go to Second Front's official blog posting about it here.

I just want to be extremely clear with you here that by no means did I intend to be the real Howard Rheingold. The whole performance was about identity theft and how one's avatar persona and trademarked personality - even if it is based on one's Real Life (RL) self - is completely at the mercy of Lynden Lab's Terms of Service.

Did you know they own the rights to use your avatar in any context that they see fit?

They can make you advertise for Second Life's corporate side or (gasp!) perhaps even force your avatar clone to appear in a Pepsi ad or something, with only your tacit consent... By tacit consent, I mean that you had briefly read the "Terms of Service Agreement" and had signed it perhaps without thinking of the consequences.

Anyway, Second Front wanted to dramatize the possible consequences of this Terms of Service and so we took many liberties with the original panelists that had their avatars willingly copied into the virtual world. Most of the panelists became thieves trying to steal more identities. In my case, I made the new co-opted Howard a shrewd bank manager who has been charged with the service of protecting Lynden-owned avatar identities. This of course, runs intentionally counter to the RL Howard's more open and friendly hopes for the potential(s) inherant in a "Virtual Community". I have twisted Howard's whole personality into that of a Lynden Labs crony who locks all avatar identities into a vault to be used and re-purposed by Lynden Labs in any manner that they wish.

Howard himself (the RL one) has a regular avatar in SL with his own office and an embedded virtual research practice. In fact, his usual avvie happened to wander into the Lynden Labs bank to find to his horror, that a stolen clone of his avvie had been virally possesed by Lynden Labs and this mutated and Wirxlified doppelganger was gradually being seduced by the Bank Secretary, of all people!(!)

It is my hope that Howard and the other panelists understand why we (Second Front) did this piece and twisted their core personalities into something much darker and shallow than who they really are in RL (and via their official SL interactions).

Here are some more pix for you... 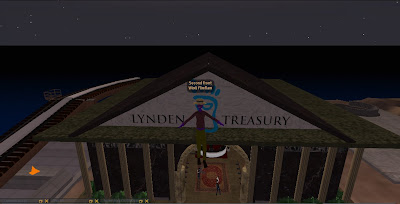 Here is another pic of
"Howard" posing in front of the Lynden Treasury. 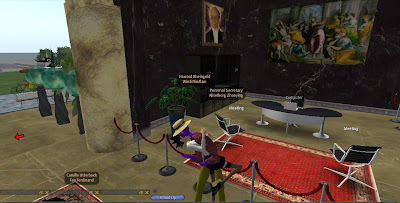 Things got steamy between Howard and his secretary...was this in the script? Of course, the secretary was only using "Howard" to get ahold of the key to the vault. I think this scene has been adopted by many James Bond style films in the past ;-) 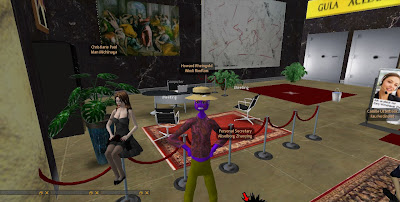 Here is a close up of Wirxli/Howard and "Christiane Paul"...

So, those are some pix from that Second Front performance called "Grand Theft Avatar III - Heist City".

To get into the role of "Howard", I had to spend some time in close covert proximity to him. In addition, I understood the necessity of making at least one pilgrimage to his personal headquarters... 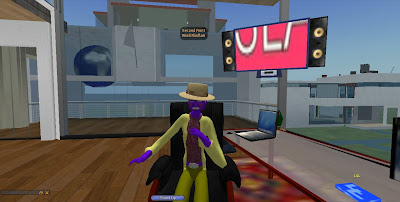 Here is another pic of "Howard" in his official office... 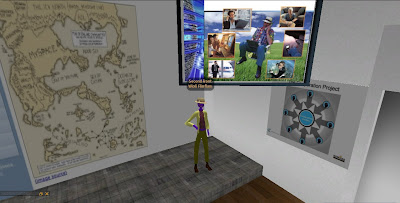 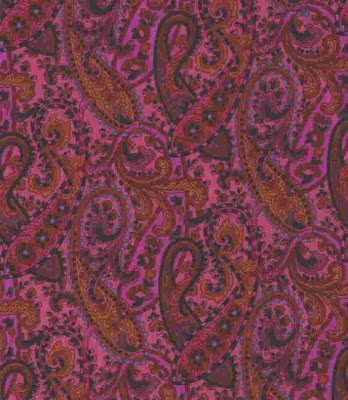 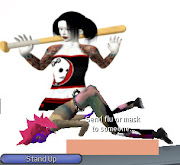